Cold forming is a processing method of aluminum foil, the most well-known is cold forming aluminum foil. Existing alloy aluminum production in the process of many is used to finalize the design of the die casting technology, cold it is multilayer composite materials, aluminum, nylon, aluminum, PVC) put product in normal temperature environment, use of stamping die a certain amount of pressure in the pressure on the sheet, enable it to produce plastic deformation or separation, needed to get the product shape and size, Such a pressure molding process. In the cold forming process, aluminum foil is molded by a mold under pressure to form a cavity. Because of this, cold forming is more expensive than hot forming. 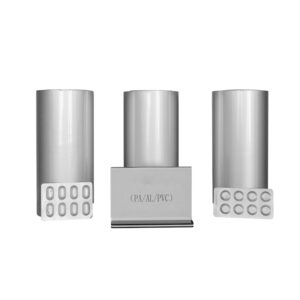 Cold-formed foils are often packaged in full foil as products requiring the highest degree of protection. In some developed countries in the West, the use of water-sensitive drugs is increasing with the use of cold-formed foils. Cold-formed aluminum foil is also gaining further popularity, as it is the only material that is 100 percent resistant to moisture, oxygen and light.

Aluminum foil/aluminum foil blister packaging is a composite material, one of which consists of a laminated plastic film (PVC or PE), the composite layer is generally an adhesive, foil, adhesive, and the outer plastic film. The outermost plastic layer of aluminum foil, which can be PET or PVC, supports the thin aluminum foil and acts as a thermal seal. This multi-layer structure helps ensure that pinholes do not pass through the foil, ensuring tightness. It also has a certain metal stretching capacity, promoting the cold drawing process. These multilayer plates are formed, filled and sealed on a machine that performs these functions in a predetermined production sequence, just as thermoplastic-filling-sealing machines do, without the blister plates being heated prior to the molding step.

In the cold forming process, the cavity needs to be larger than in the hot forming process, which increases the overall area of the package, and the product can also be moved in the bubble.